My ‘Hubby’ (we’ve now been happily not married for 22 years), in my humble opinion, has been, and continues to be, an amazing dad to our son (now 19 and at University).  He’d also been a dad before (two boys now in their 30s).

Having discovered #TheDaddyTag via the responses on twitter from @ShinnersBrood who has nominated me to do it (Thank God! I was desperate to give it a go and gave a HUGE HINT); and as a result of my unofficial New Years Resolution to ‘get to grips with twitter’ (yes that means #hashtags and #linkys but DOES NOT commit me to being an organised and predictable blogger- I shall be continuing my Random Ramblings at random intervals as life continues to inspire me) I have discovered both #EatsleepblogRT and #wineandboobs ( #snigger)…. anyway, as ever , I digress….

I wondered how my man viewed his first and second times as a dad.Here’s his responses to #thedaddytag challenge …

Are you a Stay at Home Daddy or a Working Daddy?

I’ve been lucky enough to have been both, given two shots at it.

Would you have it any other way?

First time I always felt I wasn’t home enough.  Second time I was older and not so financially strapped so was able to balance life better

Do you co-change dirty nappies? Even the very smelly ones?

I did with all of them… thankfully he (they) can change his (their) own now!!  First time round it was my job to wring out the stenching nappy bucket (back in the 80’s it was still terry towelling… I did it with a tea-towel masked to my face.  Modern dad second time round it was a breeze – no poo scraping and bleach soaking.

A little fairy gives you the possibility of breastfeeding? Are you going for it or do you run away?

ooo err, I’d probably have been too busy playing with my tits!!!  Seriously though it would be great to give it a go.  Hell of a bonding experience.

What is the one must-have item for a daddy?

It’s not an item its a mind-set – the ability to not be embarrassed to act like a child.  Climbing trees, jumping in puddles, crawling around on the floor to play cars.

(I must chip in here – he always acts like a child and is happy to make a fool of himself – even if the ‘kids’ aren’t around…. I find it quite endearing)

How many kids do you plan on having?

(Sniggers), not any more certainly!  Threes anti social enough!  I planned on two but then again didn’t expect to find myself having a second chance.  B wanted kids and I think it’s every womans right to do so.  I was, needless to say, more than happy to oblige

(Chipping in again , I might point out that he’s a very lucky boy and I’m MUCH younger than him, I wanted a child before I was 30 and J was born 10 days before my 30th birthday – well done John!)

Lads’ nights? How often do you have them?

I’m not really a ‘lads nights’ sort of guy.

(truly proud, and rightly so, all his (our) boys are gorgeous inside and out – he even has a YouTube channel called Proud Dad 1956 – yes he really is 60 now!!! Did I mention I was much younger? 😉 )

What is your best memory with your kid(s)?

(we still play – the good thing about boys is they never really grow up so if there’s a game going, they’re all up for it… whenever any of them are home all the board games come out and everyone has always played to win, no discretion even when they were toddlers – john is very competitive , especially at Monopoly)

Name one thing you miss since being a daddy?

(In my opinion, he was born to be a dad, he shines when he’s with his kids… now he’s keen to do it again on a Grandpa scale…. #hinthint)

Weight gain, before pregnancy, during, after and now? And we meanYOU DADDY, not the mummy!

Tee Hee, that’s all to do with beer and bread!!!  Contentment = fat; Worried = thin.  Kids make me content

Dream holiday with your kids?

(to be honest he does that on the beach even without the kids – it’s just less embarrassing if he’s not building dams alone!)

Dream holiday without your kids or even without the other half? (You’re allowed to dream)

(I guess he’ll be leaving me at home then, I don’t even enjoy flying!)

How has your life changed since having kids?

Bloody hell its been so long!  first time I felt the traditional need to be a provider and as i was much younger and newly married I had constant financial worries.  Second time round I sill wanted to be the provider but was able to provide in a more well-rounded way …so it was less stressful.  But change?  I think you would have to go back to the teenage tear-away me to see anyone different than you see now.

Finish the sentence “It makes my heart melt when…”

When my boys laugh.  (Especially if its me that is making them laugh!!)

Being a second time round dad, anything is better than terry towelling

Have you always wanted kids?

Best part of being a dad?

Seeing them learn and grow into happy, responsible adults

PS: I’ve just let him read it t hough now I’ve added the photos and my comments’ he said , and i quote “well, if I don’t pull after that review …” 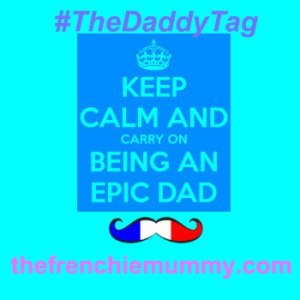